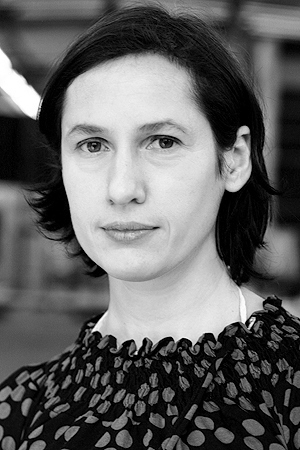 The Buenos Aires-born choreographer Constanza Macras can‘t believe that it’s been nearly 15 years since she came to Berlin – “Potsdamer Platz didn’t even exist, there were only cranes!”  Her rise to international fame has somehow paralleled the city’s own ascent onto the world stage.

Not yet 40, she is founder and leader of the acclaimed dance ensemble Dorky Park and when not on tour, she presents her work as part of the Schaubühne’s regular repertoire. And although she’s now the proud mother of a one-year-old and claims “a new maturity”, she hasn’t lost an ounce of her provocative energy. Again and again she transforms the stage into a carefully orchestrated cacophony of wild talent, sweeping audiences off their feet for standing-ovation finales. In January, she debuted a new show called Megalopolis.

After your earlier explorations of Bombay (Big in Bombay) and gated communities (Brickland), you’re once more getting to grips with the human condition in modern cities. What triggered Megalopolis?

It’s a topic I’ve been working on for some years. Like Brickland, it was a sort of evolution. Conceptually speaking, a lot of my ideas came from Richard Sennett’s book The Fall of the Public Man. I was mainly interested in breaks in the barrier between public and private space. We see people all the time in a state of anger, confusion, couples kissing… Everything is mixed up! I’m also interested in what immigration does to cities: how the minorities become a majority in the megalopolis, and how individuals who have no cultural connection meet each other.

Your performances usually have a high emotional charge. What will your audiences connect to this time?

The audience will definitely see people onstage feeling fear, anger – states that are common in large cities. It sounds a bit depressing… But as with all my works, there’s a big dose of humour. Half-bitter humour, because I like this tragicomic side of life.

What will we never see in one of your productions?

I can’t stand this ‘conceptual dance’ trend, which is not clear and creates completely invisible things – it’s like telling the audience that they are too stupid to understand what’s happening onstage. It’s intellectual superiority… Why make shows that people do not understand? Dance can be understandable and intelligent at the same time.

So, do you think about the audience when you create a show?

Well, I don’t do it for the audience, but I like the fact that they can identify with each show at some point. People cannot feel things in the same way I do in my performances. Their take on it is always personal – I cannot control it, nor do I want to! The interesting thing to transmit is the concept of the show.

That can’t be easy, given the complexity of your choreography…

In my shows, many things happen simultaneously; each [audience member] will give their attention to what they consider to be the most interesting thing at a given time, or will follow the character that attracts them more. Like in life, you have to choose what to look at. The choreographies are also meant to be seen more than once.

Do you consider your work to be provocative?

Provocative, yes – well, I don’t know… I don’t try to provoke, but it’s good to create something, and why not controversy? My work can’t be liked by everyone. If it was, I’d be worried!

Which is the most provocative thing you’ve ever done?

Actually, everything… Maybe the autofellatio in I’m not the only one. But, actually, you never know what’s going to be provocative, so. I don’t really think about it when I’m working.

Do you remember any of your choreography with special affection?

No, I’m not nostalgic about any of my old work. The company has changed, I am not the same person as I was at the beginning, and my perception of the past has changed as well. The most beautiful time is the one I’m living through right now, since the birth of my son a year ago. Megalopolis represents my ‘present’.